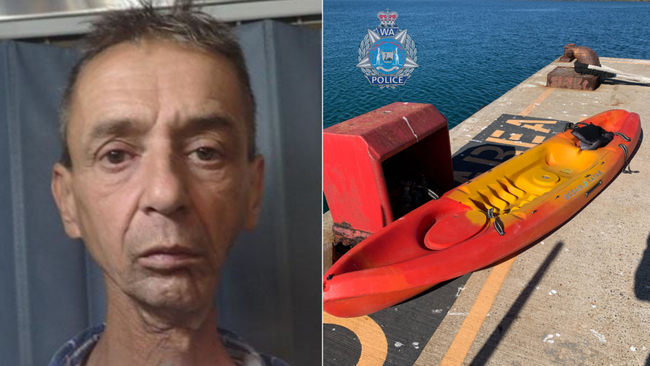 Ian was last observed paddling out in his kayak. When he failed to return home as expected he was reported as missing by his housemate. A marine search was conducted in the vicinity and a kayak and paddle were located separately at sea, however Ian has not been seen since.

Anyone with information which may assist in locating the whereabouts of Ian is urged to call Crime Stoppers on 1800 333 000.

Fears are held for an inexperienced kayaker missing off Point Peron since Tuesday, with a large scale search underway to locate him.

Ian Steven Tolli was last seen kayaking in the area at about 1.30pm but did not return from his paddle.

His orange kayak was found about 300m from the coast, near Kwinana beach.

Overnight water police, police airwing, the RAC helicopter and marine rescue officers were deployed to locate the 54-year-old and the desperate search continues this morning with shoreline patrols and jetskis also combing the area for the missing man.

Mr Tolli was believed to have been wearing a Hawaiian shirt and shorts. It is understood he had a brown/grey life jacket with him.

He is described as 188cm tall with a slim build, light skin, short brown hair and brown eyes.

Anyone with information is asked to call WA Police immediately on 131 444.

Ian Tolli's orange kayak was found 300m off the coast but an inexperienced kayaker is still missing.

A desperate search is underway for an inexperienced kayaker missing off Point Peron in WA since Tuesday afternoon.

His orange kayak was found about 300m from the coast, near Kwinana Beach, but Tolli is still missing.

In recent years there have been regular shark sightings around Point Peron, which is located south of Perth near Rockingham.

Tolli is believed to have a life jacket with him which is old and light brown or grey in colour.

He is described at 188cm tall, of slim build, with light skin, short brown hair and brown eyes.

Police do not know what clothing he was wearing at the time of his disappearance.

His kayak is approximately 3m long and made of plastic.

It has two wooden handles at each end of the kayak, tied with a thin rope.

The kayak is old and in reasonable condition, police said.

Tolli was using a white bladed paddle with an aluminium shaft.

Anyone who has information is asked to call police on 131 444.

#UPDATE: The marine search for Ian Tolli, missing off the coast of Rockingham, has been suspended.
The 54-year-old was last seen kayaking near Point Peron around 1:30pm on Tuesday.