Updated age-enhanced image (right) of what Grant may look like in 2021. 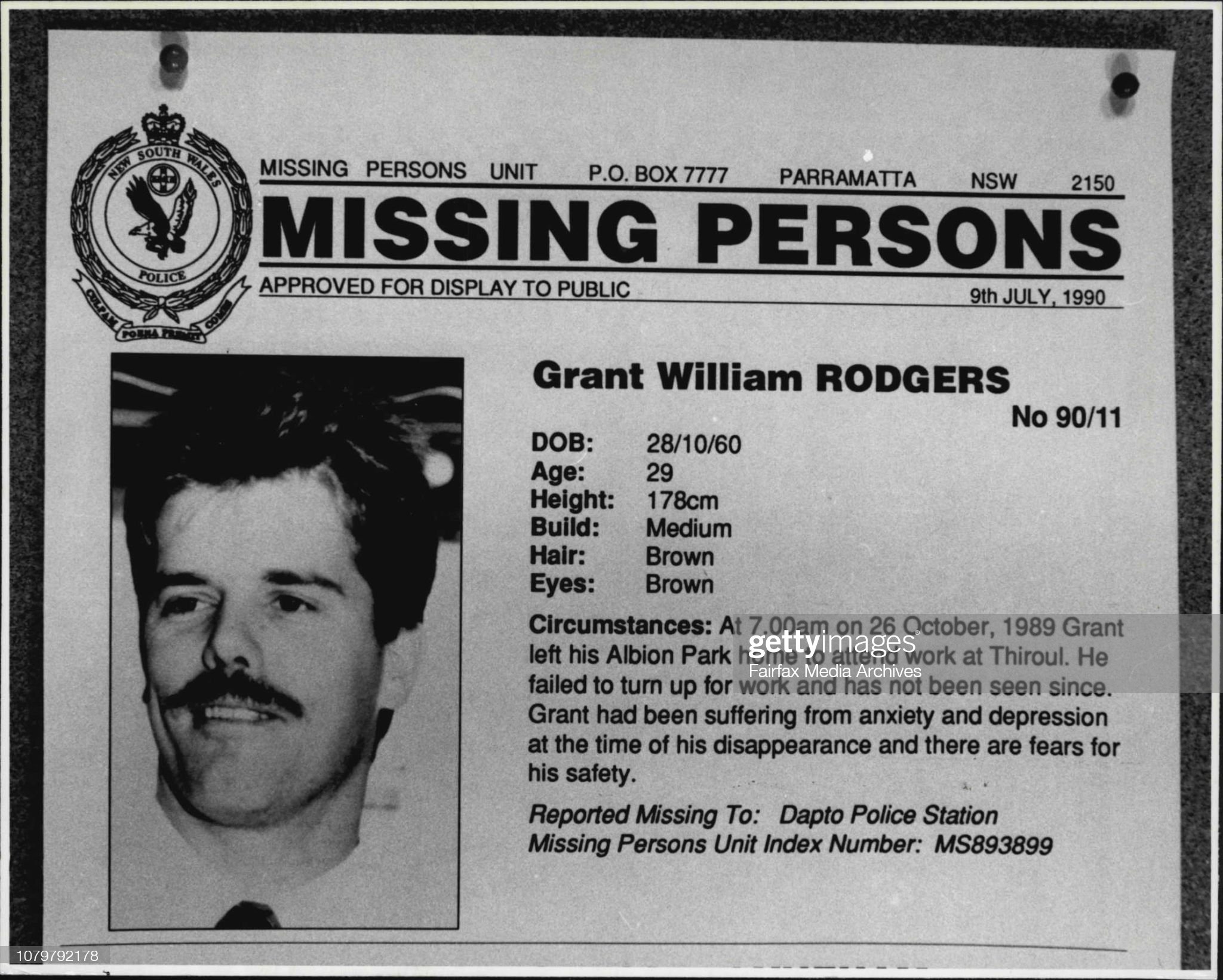 Police have released photos of Grant. The first photograph is what he looked like at the time of his disappearance and the second image has been aged to show what it is believed he would look like today.

In the days before her death a frail Vera Rodgers still held out out hope that her only son, who had been missing for 23 years, was happy somewhere.

"She said before she passed: 'I want to say goodbye to Grant.' It was really, really sad to hear," daughter Jane Neville said yesterday.

"Perhaps she and dad and Grant are all together now."

In 1989 the Rodgers family was dealt a massive blow when Grant's four-wheel drive was discovered at Mt Kembla without any trace of him.

The 29 year old had left his Albion Park Rail home for work in Thirroul on October 26 but never arrived.

It was particularly hard for mum and dad as his parents, something I didn't fully appreciate until I became a parent," Mrs Neville said from her home in country Victoria.

"Much of mum and dad's last years together before dad passed away in 1999 were spent searching for Grant. They never gave up hope."

Each year Mrs Rodgers contacted the Illawarra Mercury around the time of Missing Persons Week, desperate for any leads from the public.

After a few years of no news, the couple packed up and left the Illawarra region to run a post office in central Victoria.

"That was 20 odd years ago, they had a ball running that. But they were never the same," Mrs Neville recalled.

"After Grant went missing they became really unsettled, so they moved quite a bit.

"Mum and dad loved living in country Victoria for much of the final phase of their lives together: gold panning, birdwatching, bushwalking."

Mrs Neville had feared her mother would not cope without the companionship of her husband but, after his death, she picked herself up and got on with life.

She loved getting letters from her sister Wilma who "wrote to mum every week, entertaining her with tales of Wollongong and the beauty of her garden".

Mrs Neville said her mother had been an inspiration, who showed incredible strength when dealt life's worst cards.

"Mum never, ever lost hope. She just thought Grant was out there somewhere, she had faith he was happy," Mrs Neville said.

"She always felt Grant would come back."

Today, Mrs Neville carries the torch for her mother's lost son and her dear brother.

"It was all so strange. But, like mum said, there is always a chance he is out there somewhere. We've put notices in national papers about mum's death, just in case."

Despite suffering the worst pain any mother could imagine, she leaves her loving daughter filled with fond memories.

"Mum was lovely. She was very pretty, full of life and, despite the sadness and distress of Grant's disappearance, still took pleasure and

interest in everything and everyone around her."

A funeral service for Mrs Rodgers, who died on Friday, will be held at St Andrew's Uniting Church in Maryborough, Victoria today.

As Missing Persons Week continues, NSW police are re-appealing for information into the disappearance of an Illawarra man more than three decades ago.

Grant Rodgers, then aged 29, was last seen leaving his home in Albion Park about 7am on Thursday 26 October 1989.

Officers from Lake Illawarra Police District were notified when he failed to arrive at his workplace in Thirroul later that day.

Grant’s 4WD was found at Mount Kembla the following day, on Friday 27 October 1989.

He has never been seen or heard from since.

“At the time of his disappearance, Mr Rodgers was described as being of Caucasian appearance, about 180cm tall, with brown eyes, brown hair and a moustache. He also had a large scar on the left side of his back,” NSW Police said in a statement today.

“As investigations continue, NSW Police, together with Mr Rodgers’ family, are appealing for anyone who may have information about his disappearance to come forward.”

Minister for Police and Emergency Services, David Elliott today urged anyone with information about the disappearance of Grant Rodgers to come forward to police.

“Grant was just a young man when he disappeared more than 30 years ago. He was on his way to work, and on a normal day would have come home to his loved ones,” Mr Elliott said.

“As we commemorate Missing Persons Week this year, it is important to acknowledge the devastating impacts for the people left behind when someone disappears.

“His family deserves to know the truth about why Grant disappeared without a trace all those years ago,” Mr Elliott said.

Lake Illawarra Police District’s Detective Senior Sergeant Clem Scott said now was the time for anyone who knew how and why Grant disappeared, to come forward.

“Someone somewhere must know what happened to Grant. His family deserves answers, and even the smallest of clues could hold the key to finding out what happened,” Det Snr Sgt Scott said.

“Grant’s family has been living with unanswered questions for more than three decades and deserves to know what happened to their much-loved son and brother,” he said.

Grant’s sister, Jane Neville, said it was difficult for people to imagine how horrible it was for someone you love to disappear for a day – let alone 32 years.

“There has never been a clear reason why Grant went missing, or any productive lead to find him,” Mrs Neville said.

“Police and authorities, family, friends and strangers have given us strong support, but he’s still missing. It’s getting hard to believe that he is still alive after all this time,” she said.

“Any information – not matter how small you may think it is, could be the missing piece to the puzzle. There must be someone out there who knows something. If there is, please help.”

Anyone with information about Mr Rodger’s disappearance is urged to contact Crime Stoppers on 1800 333 000.

Missing Persons Week is an annual national campaign to raise awareness of the issues and impacts surrounding missing persons and runs between Monday 1 August and Friday 6 August 2021.

For more information on the campaign visit www.missingpersons.gov.au.

Grant Rodgers left his Albion Park Rail home for work on October 26, 1989, but never made it and was never seen again.

Despite the years rolling on, his family have never lost hope that he is alive.

Police have renewed an appeal for any information about the former Wollongong metallurgist, pleading that his family needs closure.

"It's OK, Grant ... you don't have to come back to this area if you don't want to but please just make contact with Crime Stoppers for the sake of the rest of your family," said Detective Senior Sergeant Clem Scott, Investigations Manager at Lake Illawarra Police District. "They're in pain every day, they need some sort of closure. Unfortunately your mother passed away, she never got to say goodbye, she never got to know the result of whether you're alive or not."

Mr Rodgers is one of a handful of long-term missing person cases for the Lake Illawarra District, although authorities have never given up investigations.

Although the then 29-year-old's 4WD was discovered at Mount Kembla following his disappearance, a coroner's report found there was "every opportunity that he was still alive".

"We know that he had a high pressure job at the time he went missing, but it was out of character to go missing and to leave his loved ones in that way," Detective Senior Sergeant Scott said.

"[His sister Jane Neville has] provided some information over the years and that's led us in a few different directions both around this area and also interstate.

"But everything we've tried so far we've come up short, we've got no confirmed sightings of him for 30 years. But she's still holding onto that hope that he's out there somewhere."

Ms Neville described her pain over the years as sadness, frustration, anger, fear and a great sense of loss.

"It has been pure torture," she said. "What makes me keep going is best case scenario, that somewhere out there he's happy, he's got a great life, possibly a life he couldn't have before he disappeared."

Detective Senior Sergeant Scott said there had been a review of how missing persons operations are conducted in NSW to improve outcomes for loved ones. This has included increasing the reward money offered on information for some cases, and the use of a new targeted SMS system adapted from a tool used during bushfire emergencies.

Detective Senior Sergeant Scott said Illawarra authorities were looking into the use of the geo-specific messaging tool, which has been in operation in other regions since March. It sends a text message to mobile phones within a specific geographic area describing the missing person and including a link to their image, the texts will always come from the same mobile number, +61 444 444 444.

Anyone with information about Mr Rodgers' disappearance is urged to contact Crime Stoppers on 1800 333 000. There are currently 239 NSW Government rewards on offer to find missing people with two more increased rewards of $1 million each being announced this week.

The vast majority of people reported missing are found by police within the first 24 hours, but there are long-term cases that remain open and under investigation and regularly reviewed.