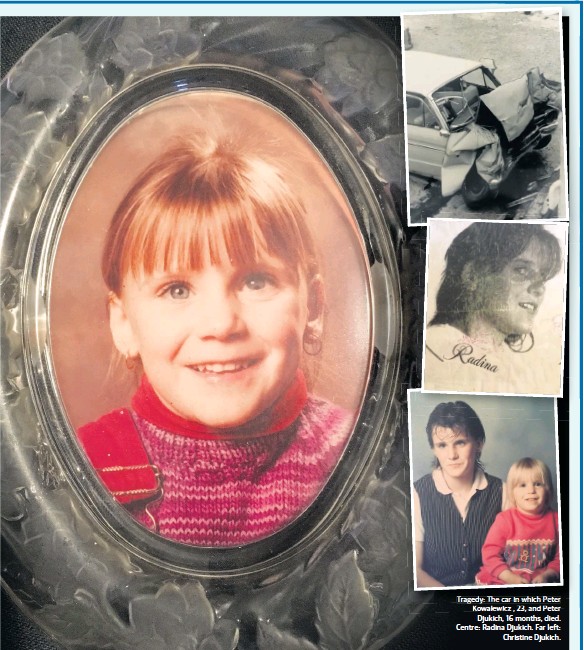 At about 7pm on the evening of Friday, 15 May 1992, 14 year old Radina Djukich left her home address in Edgefield Way, North Beach. She later spoke to her mother by telephone, the last contact between the two. Radina was reported as a missing person the following morning.

The person or persons responsible for Radina’s disappearance have not been identified.

If you have information that may assist police to locate Raymond please call Crime Stoppers on 1800 333 000.

Missing since May 16, 1992 from Perth, Western Australia.

Circumstances of Disappearance
Radina Djukich was reported missing by Ronald Joseph Buckland on May 16, 1992, six weeks after she was released into his care after an appearance in the Children's Court.
At the time, Buckland was on parole after serving part of a six-year sentence for breaking and entering. He had an extensive criminal record, including convictions for assault and armed robbery. In 1982, he had been declared an habitual criminal.
Buckland was not Radina's father in any legal sense, yet the Children's Court released her on a $1000 surety with the condition that she lived with Buckland and observed a 7pm to 7am curfew.
When she disappeared Buckland said she had run away interstate.
A year later, Buckland murdered his 18-year-old girlfriend, Vicki Robinson, after an argument, and buried her body in bush near Yanchep. He is serving a 20-year sentence for the crime.
In 1996, Buckland told police Radina had been murdered but denied responsibility. He led officers on an unsuccessful search for her body around the Star Swamp in the Perth suburb of North Beach.

Detectives believe they have cracked a 27-year cold case after charging a 69-year-old man with manslaughter over the 1992 disappearance of teenager Radina Djukich.

Acting Deputy Commissioner Gary Budge said police would allege the man injected the 14-year-old with substance that caused her death and buried her body in a bush grave.

Radina was reported missing from her Alvis Place home in North Beach on May 16, 1992. Despite several searches taking place over a number of years, her body has never been found.

“Obviously at times like this our thoughts are with family and friends of Radina because it is very difficult for them,” Mr Budge told 6PR’s Morning Program.

“Whilst we have charged a person with manslaughter, I would like to ask if anyone does have any information which they have been withholding, or have not been prepared to come forward with, now is the time to do that.”

Mr Budge said the breakthrough was made after police received new information more than a year ago but he said the investigation was continuing.

“Our team have been working on that backtracking on some information,” he said.

“There has been a lot of work done on this over the 27 years but they have got to the stage now in concert with the DPP where we think there is sufficient evidence to charge.”

Mr Budge said Radina’s mother, who still lives in WA, had been made aware of the breakthrough.

The charged man will appear in Perth Magistrate’s Court on Friday.

Police in Western Australia have charged a man over the death of a Perth teenager who was reported missing almost 27 years ago, alleging he killed her by injecting her with a substance before burying her in a bush grave.

Radina Djukich, then 14, was last seen in May 1992 leaving her home in the Perth suburb of North Beach.

Mr Buckland is understood to have been living with Ms Djukich at the time of her disappearance.

The teenager's body has never been found.

He said that resulted in officers reviewing old details from the missing persons investigation.

"It will be alleged that he provided an injection to Radina and she subsequently died. He later [allegedly] buried her body in a bush location," he said.

"At this time we think about her family, who will find this quite traumatic and another episode in their life.

"We are very pleased to have brought this to a charge but there is still a long way to go.

"We will never give up on these cases."

"Over a period of time friendships and acquaintances change. There may be someone out there who has some information about Radina's manslaughter or circumstances around that and we'd like to encourage those people to come forward now," he said.

"There have been a number of attempts over the past 27 years to recover Radina's remains, all unsuccessful. There are no plans to do that again right at this time."

Mr Buckland is due to appear in court on Friday.

Ronald Joseph Buckland - the man whom Radina Djukich regarded as her father - appeared in Perth Magistrate’s Court today by videolink from prison, charged with unlawfully killing the 14-year-old.

A 69-year-old man has appeared in court charged with manslaughter over the 1992 disappearance of teenager Radina Djukich.

Ronald Joseph Buckland - the man whom Radina regarded as her father - appeared in Perth Magistrate’s Court today by videolink from prison, charged with unlawfully killing the 14-year-old.

Police allege Mr Buckland injected Radina with a substance in May 1992 that caused her death, then buried her body in a bush grave.

The manslaughter charge was read to Mr Buckland but he was not required to enter a plea.

He did not apply for bail and his case was adjourned until later this month.

Mr Buckland reported Radina missing from his North Beach home on May 16, 1992.

Despite several searches since Radina vanished, her body has not been found.

Acting Deputy Commissioner Gary Budge earlier said no other potential grave sites had been identified so no new searches were planned.

Radina’s mother, Christine, has been told of the breakthrough but has not spoken publicly.

“This provides some outcome for the family in that we’ve charged someone. But there’s still a long way to go.”

A coronial inquest in 2001 found Radina had been killed, and then-State coroner Alastair Hope found Mr Buckland was either involved in her death or the disposal of her body.

But he concluded there was insufficient evidence to determine whether Mr Buckland was responsible for the teen’s death.

Mr Buckland has previously denied killing Radina or knowing what happened to her.

He named someone else as her killer and led police on four searches for her body.

Mr Budge said cold-case homicide investigators had been working on Radina’s case for more than a year and had identified a new line of inquiry.

Police are this morning searching swampland in Perth's north in relation to the disappearance of a North Beach girl more than two decades ago.

Forensic officers are at Star Swamp in Watermans Bay looking for clues into the case of 14-year-old Radina Djukich, who went missing in May, 1992.

Radina's body has never been found, but last year a man was charged with her manslaughter.

Ronald Joseph Buckland, 70, is due in the WA Supreme Court later this month.

The breakthrough in the case was announced last year by police who said it would be alleged Radina was buried in a bush grave after being injected with a substance.

"Despite searches being undertaken over a number of years ... Radina's remains have never been recovered," Acting Deputy WA Police Commissioner Gary Budge told 6PR at the time.

"At this stage we say there is prima facie evidence for a manslaughter charge."

Radina's family are understood to have been informed about developments in the case.

Officers are expected to remain in the swamp area until at least Wednesday with public access to parts of the reserve closed.

A convicted murderer accused of killing a Perth teenager who disappeared almost three decades ago has died in hospital from cancer.

Ronald Joseph Buckland, 70, was due to stand trial in December accused of injecting 14-year-old Radina Djukich with a deadly substance before burying her body in bushland.

He denied the allegations.

Ms Djukich was last seen alive in May 1992 leaving her home in the Perth suburb of North Beach.

Buckland was understood to have been living with her at the time, and he reported her missing to police claiming she had run away interstate.

A year after Ms Djuckich's disappearance, Buckland murdered his 18-year-old girlfriend Victoria Robinson, after an argument, and buried her body in bushland near Yanchep in Perth's north.

He was jailed for life with a 20-year minimum, and it was when he became eligible for parole that police charged him with killing Ms Djukich.

Buckland was charged by cold case detectives with her manslaughter after police received fresh information about her disappearance.

He had been ill for some time and at his last court appearance earlier this month, Ms Chong said she did not believe he would be well enough to stand trial.

It is understood the new search was a result of Buckland providing further information to detectives.

It was the second search conducted by cold case officers since Buckland was charged.

Inquest told of similarities between cases

An inquest was conducted into Ms Djukich's suspected death in 2001, with police telling the inquest her disappearance had "similarities" to what happened to Ms Robinson.

Buckland gave evidence at the hearing and denied having anything to do with either Ms Robinson's death, or Ms Djukich's disappearance.

In his findings the then-state coroner, Alastair Hope, said he believed Ms Djukich was the victim of a homicide, and that Buckland may have been involved in the killing or in disposing of her body.

However he found there was insufficient evidence to conclude that Buckland was the killer.

At the time, Ms Djukich's mother said she "had no doubts" Buckland was responsible.

"I just want my daughter back, and I'm just praying to God that he [Buckland] does come clean and gives me back my girl."

A search continues in Perth's north for the remains of a 14-year-old girl who went missing almost 30 years ago, having been triggered by her alleged killer's deathbed confession.

Radina Djukich was last seen in May 1992 leaving a home North Beach, where she had been briefly living with Ronald Joseph Buckland, who paid her surety after she got into trouble with the law.

The following year, Buckland murdered his girlfriend Victoria Robinson and served 20 years behind bars for the killing.

When he became eligible for parole last year, aged 69, he was charged with manslaughter over Ms Djukich's death.

He was accused of killing her by injecting her with a substance, then burying her in a bush grave, but pleaded not guilty and was due to face trial.

He died on Thursday from cancer after tipping police off to bushland at Yanchep, where Ms Robinson's body was found.

Corrective Services said Buckland had been receiving palliative care in the infirmary of Casuarina maximum security prison and died after being taken to hospital by ambulance, having told staff he was feeling unwell.

Buckland claimed Ms Djukich had run away interstate, but led police to Star Swamp Reserve in North Beach in February.