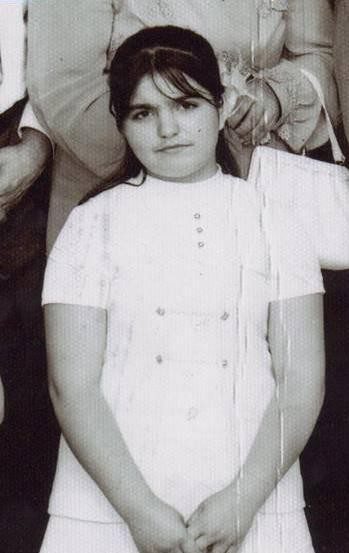 Above - Age-progressed image of what Anna may look like today

Anna Banitskas was 15 years old at the time she disappeared. Anna was last seen when she left her home address for work. She did not attend her workplace and it was found she had taken family photographs from a photo album. Anna’s family are eager to speak with her but would abide by her wishes if she doesn’t want contact with them.

FIFTEEN-YEAR-OLD Anna Banitskas left for work one winter's morning in 1974.

She got off the bus a couple of stops early and her family has not heard from her since.

Thirty-four years later, her elderly parents refuse to move from their Lalor family home, hoping that one day their little girl will walk down the front path once again.

"They won't move because they think she might still come home looking for them," Anna's sister, Loretta Pantou, said.

Three decades later, she is desperate to know whether her sister is all right. Anna took photographs from her family album before she disappeared.

"It's worse now as I am getting older and I have got my children. I feel more pain for my parents. I just want to give them some piece of mind," she said.

"There has been no trace, no sign of anything horrible happening to her.

"So it just looks like she wanted to go, but I can't understand why."

Ms Pantou and her two brothers were teased at school about Anna's disappearance and the incident was not discussed at home.

"Nothing was said for years," she said. "If she could just contact us somehow and let us know that she is all right, that's all."

Police in Victoria are appealing for fresh leads in the state’s missing persons cases in light of the 25th anniversary of National Missing Persons Week.

Last year alone more than 8500 people went missing from somewhere in Victoria. More than half of those reported missing between June 2012 and June 2013 were under the age of 17.

This year’s focus for National Missing Persons Week is mental illness and recognising the warning signs before a loved one goes missing.

Commander Doug Fryer from Intelligence and Covert Support Command said even the smallest piece of information could be the crucial key to locating someone that’s missing.

“A significant number of those reported missing each year sadly suffer from some form of mental illness,” he said.

“When a loved one, family member or friend disappears without explanation, it causes significant heartache for the families involved.

“We know that some people don’t want to be found. It’s not our job to judge, but rather make sure that anyone reported as missing is safe and well.

“For those of you who may have started a new life without your family or friends knowledge please let police know so we can at least alleviate some of that pain.

“You don’t need to tell us where you are, just that you’re ok”.

Of those that go missing, many are found within a short period of time. But there are some who are not.

Annastaes (Anna) Banitskas has been missing from the Thomastown area since 1974.

Anna’s family have told police that she left home at about 7am on 27 August to catch a bus on Kingsway Drive, Thomastown, to her workplace. Anna never arrived at work.

Police believe an associate of Anna’s was working for Michael Brothers Builders at a Kingsway Drive building site in Lalor at the time of her disappearance and may be able to assist with enquiries.

Police have to date been unable to track down this company or anyone associated with it.

Anna was 15 years old at the time she disappeared.

Police are calling on the public for information that may lead to finding these missing people. Information about missing persons can be reported by calling Crime Stoppers on 1800 333 000.

To report someone missing, contact your local police. If it is an emergency, such as a child or elderly person that has gone missing, call Triple Zero (000).

National Missing Persons Week, which runs from July 28 to August 3, is recognised annually to raise community awareness about missing persons and the impact that loosing a loved one can have on both their families and the wider community.

The week is coordinated by Australian Federal Police through the National Missing Persons Coordination Centre, along with support from State and Territory police.

By Yolanda Redrup - The Age

Despina and Sotirios Banitskas lived in their family home for almost 40 years, holding onto a small glimmer of hope their much-loved daughter would one day return.

On August 27, 1974 their 15-year-old daughter Anna left their Lalor home for work in Thomastown. But she has never been seen again.

Desperately clinging to the possibility Anna would one day return, Mr and Mrs Banitskas stayed at the same house until old age saw them moved to a nursing home.

Even in sickness, the elderly couple insist their remaining sons and daughter keep the house in case she returns.

Anna's siblings Loretta Pentou, 48, Chris Banitskas, 58, and Peter Banitskas, 47, remembered her as an "outgoing", "normal" teen who liked to sing along to the radio.

"She was happy, that's my memory of her," Loretta said.

On the day of her disappearance, Anna left home at 7am to catch a bus from nearby Kingsway Drive to her job at the Rolex Paper Products factory. Anna had left school in year nine to help support the family, who had migrated from Greece three years earlier.

On the morning she disappeared, her mother saw her packing some family photos and questioned her about it, but Anna said she just wanted to show them to her friends.

But these photos became a critical factor in the case, leading to suggestions Anna may have chosen to leave.

"It's been 40 years, you'd think if something was bad by now it should have been out there, so we think she might still be alive," Chris said.

On her mother's request, Loretta visited a psychic to try and find out what had happened to Anna.

The psychic said Anna was alive and living in Doncaster, but the family's hopes were dashed after a fruitless search of the area.

In Australia running away as a child isn't a crime, unlike in some jurisdictions of the US.

Each year about 35,000 people are reported missing across Australia, equalling one person every 15 minutes. But of these people, 95 per cent are located quickly, often within a week.

Forty years on Anna's fate remains unknown, but time has not healed the loss felt by her sister and brothers.

"It's just like something's missing all the time," Loretta said as she welled with tears.

"It doesn't matter how many years have passed we still love her and still want her to come home if she's out there, or tell the police she doesn't want us to keep looking for her ... just something."

Detective senior constable Craig Hall said there were no leads in the case, but detectives were hoping to speak to a building contractor who had worked on a site near the Banitskas's home.

"The gentleman is elderly and I'm liaising through his son to arrange a time to speak to him," he said.

"I don't know where she is, that's why I'm appealing today to the public."

Anna would now be 55 years old, possibly with a family of her own. Her siblings are desperate to know what happened to her, but say they would not contact her if it was against her wishes.

When Anna went missing the eldest sibling Chris felt the burden of responsibility.

"I went through a lot. I got sick at one stage as well because of all of these pressures," he said.

"I had to comfort my parents as much as I could. I spent all these years doing that. Now it's time for her, if she's out there, please show yourself for Mum and Dad."